Which Type of Black Mold is Toxic? 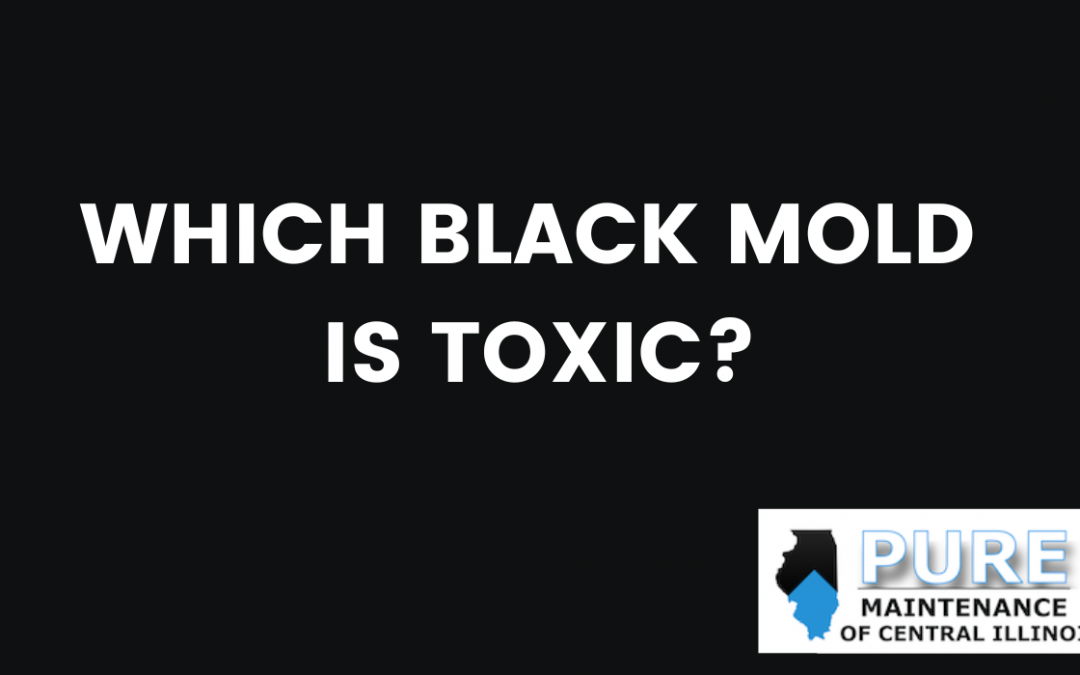 “Black mold” is a phrase that strikes fear into homeowners, home sellers, and contractors alike.

The thought of owning a building with black mold is enough to stop a sale dead in its tracks, or shut down renovations for days as the mold is removed and remediated.

While other mold species are likely to cause allergic reactions and damage surfaces, black mold is known for being toxic for humans and animals. But what you may not realize is that black describes the species of mold, not just its color. Not every mold that is black in color is necessarily toxic black mold.

This distinction is confusing for people who aren’t familiar with mold (which is most of the general population). That’s why it’s important to have a trusted mold expert on your side.

Regardless of the type of mold you find, it will have to be removed, but Pure Maintenance of Central Illinois can help clear up some of the confusion and fear surrounding black mold.

It’s important to be able to identify which types of black mold are toxic so you can take action and get rid of it as soon as possible.

Black mold can cause physical and psychological effects in people and pets due to the dangerous mycotoxins it releases into the air. These mycotoxins are inhaled, causing symptoms ranging from headaches, coughing, and sneezing to chronic fatigue and insomnia.

There are actually only a few mold species that fall into the toxic black mold family. These strands produce mycotoxins that can make you and your family very ill:

All of these mold varieties are commonly found indoors and outside. In small amounts, they are not harmful. In fact, some of them can be used in beneficial ways (such as penicillium for the production of penicillin).

True to its name, black mold is dark black in color, sometimes with dark green spots. Its texture is slimy, although you probably don’t want to touch it and find out!

Black mold is usually the result of a long-term moisture problem, not a recent occurrence.

Toxic black mold can grow inside your home and outside. It can be found in the soil, on outdoor furniture, inside crawl spaces, and in the attic. Nowhere is safe from black mold if the conditions are right.

Health issues are usually worse as well. Black mold exposure can cause chronic sinus infections in adults and can lead to pulmonary hemorrhage — bleeding in the lungs — for babies and small children.

There are some differences between the most dangerous forms of mold — toxic black molds described above — and molds that are black in color. They don’t share the same characteristics and are, therefore, considered less dangerous.

These varieties can be black as well, but they will usually have some other color mixed in. Molds that are dark brown or green can be so dark that they only look black.

There are thousands of species of black colored molds, so the texture of these molds varies widely.

Any mold can be allergenic, especially over a long period of exposure, so you really can’t tell what type of mold is present based on your reaction. Physical responses to mold depend on the person (or animal). You may have a strong allergic reaction to mold while another person in your household doesn’t react at all.

Another thing to consider is that mold changes color as it grows. Some species may pass through a stage of growth when it appears black, but the established colony becomes a completely different color.

There is one common factor in every case of mold: moisture. Humidity, water leaks and spills can lead to mold growth.

Black mold can grow on cardboard, wicker, wood, and drywall. All mold feeds on living or once-living materials, which our homes are full of. You have to be vigilant to catch mold growth before it becomes a major problem.

You’d expect to find mold in a bathroom or kitchen where moisture is a constant. Basements and attics are common places, too. But usually, you’ll see the mold start to develop and take care of it right away, while the colony is still small and relatively benign.

Black mold usually doesn’t grow in these areas unless you have a leak under the sink or within the walls, where it will have ample time to form a colony without interruption.

Toxic black mold isn’t as likely to be found in an area that you frequent. It takes time to establish. Black mold is most common in areas that are perpetually moist, preferably for at least 72 hours. For some areas of your home, it is entirely possible that they would be undisturbed for that amount of time…or longer.

While black colored molds aren’t considered as dangerous as toxic black mold, they still aren’t something you’d want in your home. Mold should be removed as soon as you find it in order to minimize its effects on your health, regardless of what kind it is.

Pure Maintenance of Central Illinois in Champaign can provide thorough removal services. Learn about our mold remediation here. Once we are finished, you can be confident that the harmful mold colony has been destroyed and that mold levels within your home have been restored to normal.

If the mold damage was severe enough, you may have some repairs to make after the mold is gone. Some surfaces can be cleaned and restored after mold damage, but others might need to be replaced.